Cooper's day started by waking up to his floor covered in balloons. He was so surprised! Cooper chose cinnamon muffins for breakfast. After that we got dressed and headed to the BX. He got to spend $50. He picked out 3 space alien Legos. 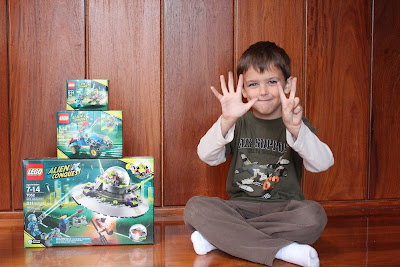 We came home and had lunch. Cooper talked to Grandma, Grandpa, Great-Grandma Kathie and Jack on Facetime. He of course had to wear his birthday hat from school.

Later in the afternoon when Daddy was ready to Facetime, Cooper got to open his presents while Daddy watched. He was so excited. He loved the 7 mini figures I wrapped separately. He opened each one slowly and carefully. The Lego figures are always a surprise. He was very happy with the ones he got.

Cooper was so surprised we got him the new Dino Lego Headquarters. He was so excited. I'm so happy Josh was able to see his excitement. He loved the books and other Lego's we got him also, but that Dino set was his favorite. He opened presents from YiaYia and was very happy to get his own box of crayons and new jeans. He opened presents from Grandma Michele and loved his new shark robe. He had to put it on right away. He opened presents from Grandma and Grandpa and was so surprised to get one of the new Lego Superhero sets. He also got lots of books to help with his ready. Cooper was very blessed and got so many wonderful gifts. He is sending a huge "THANK YOU" right now. 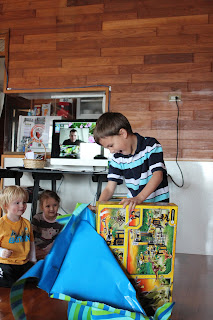 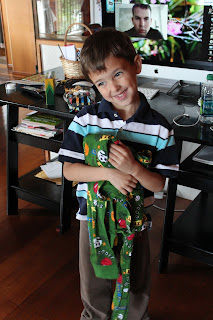 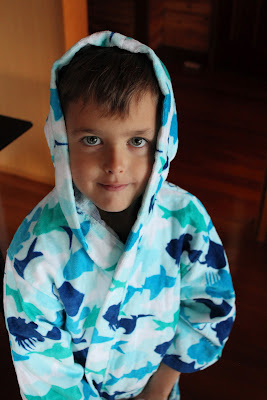 After opening presents we went to dinner. Cooper picked McDonalds. We ate there and the kids had a blast. We came home, continued building Lego's and watched Dolphin Tale. Cooper had a great day. He is very excited for Daddy to come home and for his big birthday party at the park on Monday.