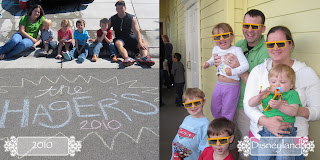 February- Disneyland for 4 nights, 5 days. We had so much fun. It was Parker's first time at Disneyland. We also celebrated Valentine's Day and Cooper's Birthday. Aunt Chelsea was able to fly down and go with us. It was a wonderful Disneyland trip. 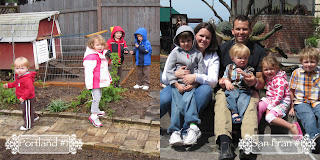 March- While Josh was in Bahrain we went up to Portland for Spring Break. It was a long drive with all 4 kids, by myself. We had a fun visit and a great Easter celebration.

May- We took a day trip out to San Francisco. We went to the zoo then walked around Fisherman's Wharf and Ghiradelli Square. Then we met Grandma Michele for dinner and a drive down the curviest road in the US. 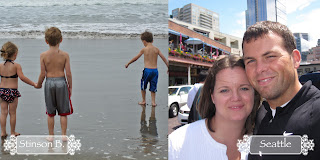 June- A week after school got out I took the kids to Stinson Beach, just north of San Francisco. It was a little chilly in the beginning but then it warmed up. I got so sunburned, it was really bad. The kids had a great time and played in the water for ever. Parker, however, was terrified of the sand and wanted nothing to do with it.

July- We drove up to Seattle with Josh's mom and sister for fun afternoon in Seattle. We went to a House of Hoops opening and saw Brandon Roy. We had a yummy lunch and walked around a little bit. It was Josh's first time in Seattle. 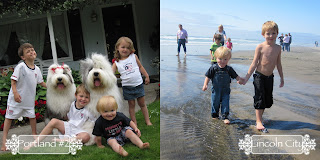 July- We enjoyed a week and a half visit in Portland. We celebrated 4th of July. We went to the zoo. The kids played outside for hours. They played on a slip'n'slide for the first time and loved it!

August- While in Portland we went to Lincoln City for the day. The weather was perfect. Parker was terrified of the sand for the first hour or so. Grandpa was finally able to get him to walk around in it and then he had fun. We had Dairy Queen and the kids had their first dilly bars. 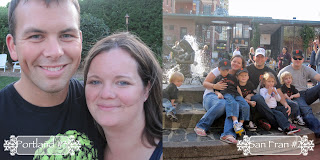 August- I took the kids up to visit Portland before school started and to meet Holden. Josh was able to meet us for 2 days at the end of the trip. The kids played and played outside. They just love being at Grandma and Grandpa's house.

November- While my mom, brother Ryan, and nephew Jack visited we took a day trip to San Francisco. We took the kids on their first trolley ride. Parker loved it. I was able to meet up with a child hood friend that I hadn't seen in 12 years. It was a great day in San Francisco, warm and sunny!
Posted by Shannon at 11:39 PM