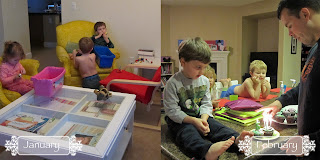 January- The kids spent the month putting together Legos from Christmas, playing Super Mario Bros and playing with all their new toys. Carson celebrated his 100th day of school.

February- We went to Disneyland. Cooper turned 5 with a Princess and the Frog birthday. We learned Josh would be leaving very quickly for Bahrain. 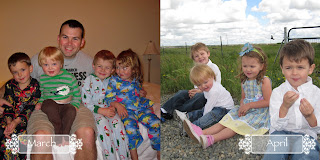 March- Josh went to Bahrain. The kids and I tried to keep ourselves busy. We went up to Portland for Spring Break and celebrated Easter up there.

April- Josh surprised us and came home early! We were so happy to have Daddy home. We started playing in the pool and sprinklers. 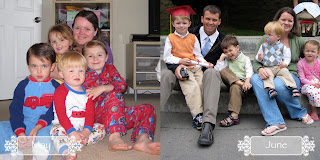 May- Carson worked really had during his last full month of school. We all ended up getting a bad cold that took some time to go away.

June- Carson graduated from Kindergarten. We are all so excited for summer. The boys have been playing the Wii and are crazy about it. We found a Church we really liked and started attending. The boys went to Church camp and loved it. 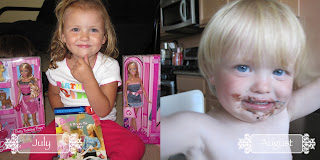 July- This month Emma turned 4 and we celebrated with a Barbie party. It was really hot, so we didn't play outside much. Josh ran a half marathon.

August- Parker turned 2. We celebrated with 2 parties, a huge one in Portland and a smaller one here. Carson started 1st grade and Cooper started Kindergarten. I started watching AJ. 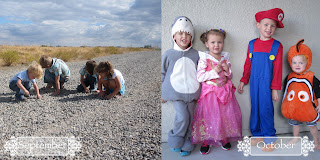 September- The boys were busy with school. We spent the month talking about Halloween. It is still hot but cooling off at night. Josh has been training really hard for the Portland marathon.

October- Josh ran in the Portland marathon. I turned 29. The kids had a Halloween party. They loved trick-or-treating and Parker really got into it. 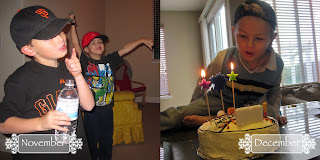 November- The Giants won the World Series and it was crazy in our house! Josh turned 28. We made a big Thanksgiving dinner and had a wonderful week off to relax.

December- The month started with an early Christmas with the Hager's. The kids were Dedicated at Church. We watched Cooper's super cute Christmas program. We had an amazing Christmas and a very nice 2 week break. We celebrated Carson's 7th birthday.